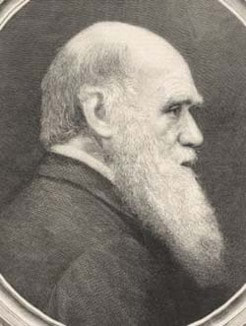 5.2.1836:  After six days passage, of which the first part was fine and the latter very cold and squally, we entered the mouth of Storm Bay. The weather justified this awful name. This bay should rather be called a deep estuary, which receives at its head the waters of the Derwent.
The lower parts of the hills which skirt the bay are cleared and the bright yellow fields of corn, and dark green ones of potatoes, appear very luxuriant. I was chiefly struck with the comparative fewness of the large houses, either built or building. Hobart Town, from the census of 1835, contained 13,826 inhabitants, and the whole of Tasmania 36,505. If I was obliged to emigrate, I certainly should prefer this place. The climate and aspect of the country almost alone would determine me.
Near the mouth of the Derwent River there are extensive basaltic platforms, the sides of which show fine facades of columns. Higher up the land becomes mountainous and is all covered by a light wood. The bases of these mountains, following the edges of the bay, are cleared and cultivated. The bright yellow fields of corn and dark green ones of potato crops appeared very luxuriant.
Little picturesque beauty in Mt Wellington, even that diminished by the vast number of little red brick dwellings on its urban edge.   The vista from the peak is flat and tame.
In London I saw a Panorama of a Hobart Town; the scenery was very magnificent, but unfortunately there is no resemblance to it in nature
Late in the evening we came to an anchor in a snug cove, on the shores of which stands the capital of Tasmania, as Van Diemen’s Land is now called. The number of Ships was not very considerable. The first aspect of the place is very inferior to that of Sydney; the latter might be called a city: this is only a town. In the morning I walked on shore.  The streets are fine and broad; but the houses rather scattered; the shops appeared good. The town stands at the base of Mt. Wellington, a mountain 3100 ft, but of no picturesque beauty: from this it receives a good supply of water, a thing which is much wanted in Sydney.  Round the cove, there are some fine warehouses and on one side a small fort.  Coming from the Spanish Settlements, where such magnificent care has generally been paid to the fortifications, the means of defence in these parts appeared very contemptible.

7.2.1836-10.2.1836: During these days I took some long pleasant walks examining the geology of the country. The climate here is much damper than in New South Wales and hence the land is much more fertile. Agriculture here flourishes; the cultivated fields looked very well and the gardens abounded with the most luxuriant vegetables and fruit trees. Some of the farm houses, situated in retired spots had a very tempting appearance. The general aspect of the vegetation is similar to that of Australia; perhaps it is a little more green and cheerful and the pasture between the trees, rather more abundant.


12.2.1836: Darwin’s twenty-seventh birthday.
I had been introduced to Mr. Frankland, the Surveyor-General and during these days I was much in his society. He took me on two very pleasant rides and I passed at his house “Secheron”  Battery Point, the most agreeable evening since leaving England.
There appears to be a good deal of Society here: I heard of a Fancy Dress Ball at which 113 were present in costumes!
I suspect also the Society is much pleasanter than that of Sydney. They enjoy the advantage in there being no wealthy convicts. The Colony moreover is well governed; in this convict population, there certainly is not more, if not less, crime than in England.

13.2.1836: Darwin’s host for the evening was Alfred Stephen, Attorney-General and owner of ‘Stephensville.’
The house large, beautifully furnished, dinner most elegant. An excellent concert of rare Italian music.
Stephensville had been the site of that mighty fancy-dress ball, while 96 guests had recently danced at ‘Secheron’.
Is not this astonishing in so remote a part of the world?
Whereas ex-convicts poisoned affairs in New South Wales, there is a better class of Society here.
It is a most admirable place of emigration.
The Australian colonies far outstripping in civilization those of S. America.
I would be very loth to emigrate.  The moral state of the lower orders is of course detestable, the society of the higher is rancorously divided by party feeling and the country is not to me pleasing.

There is a hierarchy of races, those at the scale’s upper end destined to increasing dominance.  Tasmanians’ post-settlement experience is a result of, and indeed a stimulus to, civilization’s progress.
The hunting skills of Australian Aboriginals were chief among their attributes. These people are far from being such utterly degraded beings as they are usually represented.
Aboriginals’ skills sufficed only to make them appear to stand some few degrees higher in the scale of civilization than the Fuegians.
White settlement had intensified the nomadic element in Aboriginal life and that process is one cause of population decrease.
The Australian aboriginal population decline is inexorable, an instance of the rule that contact between ‘the varieties of man’ led to ‘the stronger always extirpating the weaker’.
The Aboriginal blacks are all removed & kept (in reality as prisoners) in a Promontory, the neck of which is guarded.  I believe it was not possible to avoid this cruel step; although without doubt the misconduct of the Whites first led to the necessity.
When two races of men meet, they act precisely like two species of animals. They fight, eat each other, bring diseases to each other but then comes the most deadly struggle, namely which have the best fitted organization, or instincts (i.e. intellect in man) to gain the day.
The Tasmanians’ bush skills caused the Black Line of 1830 to fail in the short term, yet thereby was conveyed to them ‘the power and numbers of the whites.  So the way opened for the intrepid exertions of George Augustus Robinson and Aboriginal deportation to Flinders Island.
The removal is most cruel and ultimately rooted in the infamous conduct of some of our countrymen. The only alternative to have been total slaughter of the Aboriginals so that Van Diemen’s Land enjoys the great advantage of being free from a native population.
The grade of civilization seems to be a most important element in the success of competing nations.
Whether we look at it as a cause or a consequence, the more civilized always have the most artificial governments.
UA-37315528-8